What is a disciplinary meeting?

The practice of training people to obey rules or a code of behaviour and using punishment to correct disobedience is nothing new. It was a practice that we have all been subject to going through school. The workplace is not much different. The expectation that inhouse rules must be obeyed remains the same. 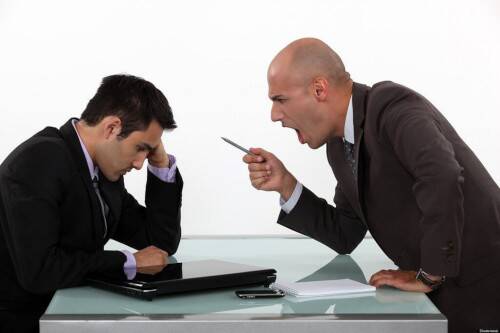 A disciplinary meeting often involves situations where there are allegations against an employee that rules or behavioural standards have not been followed, and the employee responding to those allegations is given an opportunity to be heard before a decision is made as to whether to sanction or to exonerate the accused employee.

All workplaces have different policies and procedures as to how disciplinary matters are dealt with including what sanctions could be imposed, such as written warnings and dismissal.

Whether it is a disciplinary meeting, or disciplinary investigation meeting, the employer is undertaking a process to inquire to what allegations have been raised, whether they are established, the employee has the opportunity to respond and be heard.

If an employer has written policies or contractual procedures prescribed the employer must follow them and must not take shortcuts.

I was sitting in at a disciplinary meeting last year when the HR Manager insisted on the outcome being a final written warning. Like most HR Managers I have met, this one too did not understand or know their own disciplinary policies. They were doing a performance improvement plan that had a monthly cycle. When I pointed out that a final written warning would be a short-cut given that a second written warning had not yet been issued, and I referred to their own policy, I was able to buy my client another month. He was here on a visa and wanted to keep his job for as long as possible. Let's say that if he had instead been wanting to exit, I would have played dumb on the policies, let the final warning proceed and let the employer breach its own disciplinary policy and then later use this against the employer later in bringing a claim for an unjustified final written warning and unjustifiable dismissal if the warning was later relied upon.

An example of no reasonable evidence

Very often I come across Human Resource consultants that are plainly ignorant to what the law requires. What really makes me laugh is that often we hear them say after dismissal or imposing a sanction that the employer investigated and found its findings "on the balance of probabilities" and that the employee was justifiably dismissed. These HR Managers and consultants are clearly misguided and they do not understand the law.

The "balance of probabilities"

The "balance of probabilities" is an evidential standard used by the Court in civil litigation. Compare this with criminal litigation where the standard is "beyond reasonable doubt", does that ring a bell? you might have heard that on TV. In civil litigation particularly with employment law, the "balance of probabilities" is whether the evidence established that facts alleged by a party or witness were more likely than not to be true. It is that evidential standard that the Employment Relations Authority and Employment Court are bound to when making an inquiry into what an employer did and whether a fair and reasonable employer could have taken the action that it did. The employer therefore only needs to show that their findings were concluded on a reasonable basis, not on the "balance of probabilities".

Procedural fairness requirements of an employer are easily followed where HR Managers are involved, an employer and their HR consultant can easily pay lip service to the Employment Relations Act 2000, to doing these things before coming to a decision to issue a warning or to dismiss:

Cost of representation at a disciplinary meeting

The more incompetent the HR Manager that you are dealing with, the more you will need representation if you want to keep your job. This is because if we go to a disciplinary meeting we are there to ask the employer difficult questions about their findings and processes as they are making them, and this will highlight when it is clear that a written warning or dismissal should not follow.

Disciplinary meetings and the associated efforts required to respond and engage can potentially cost thousands of dollars in getting paid representation through an advocate or lawyer. They can take hours to prepare for, attend, follow up discussions, and more meetings. Incompetent HR Managers will schedule a 1 hour meeting but it will always go over time and be 2 hours in duration and sometimes longer.

HR Managers do not learn from their mistakes and will keep repeating them. The HR Manager and HR Consultant is quite a predictable creature in its wild habitat in New Zealand workplaces and employment law. With effective representation they can be easily outsmarted.

Most of the calls we get involve employees who are hot and bothered where they have just received a letter inviting them to a disciplinary, investigation, or disciplinary investigation meeting. Do not resign! Talk to us, we help.

If we don't attend the meeting then I say "when you're fired, come back to us", and I also stress that you record the meeting, take notes, ask questions, and don't agree to anything.

If you have been fired then we may look at a doing a "no win, no fee" arrangement. Rather than being at the meeting to help the process to persuade the employer not to fire you, instead when you're fired we look at everything the employer got wrong and bring a claim for unjustifiable dismissal.

If there is a reasonable offer to settle, we take it, if not we keep going further (to the Employment Relations Authority and Employment Court as necessary).

We write for the Deals on Wheels magazine. Read our full article: 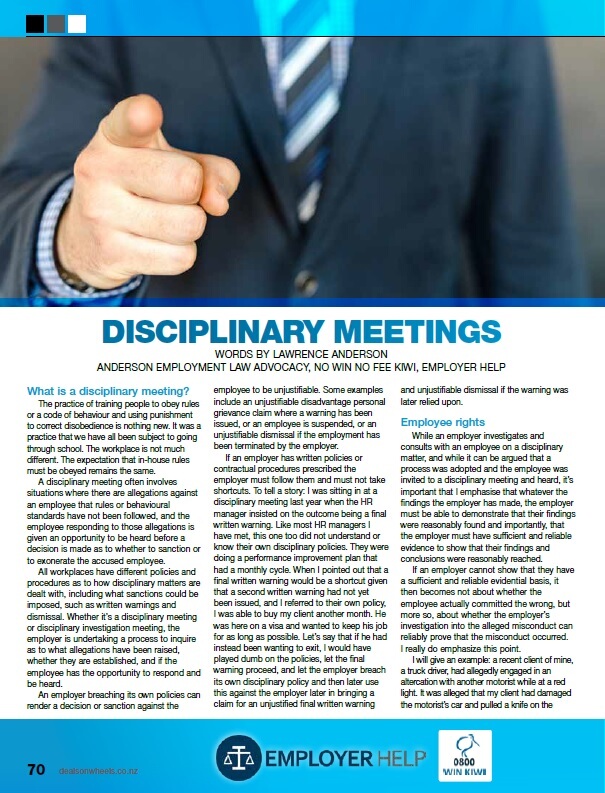